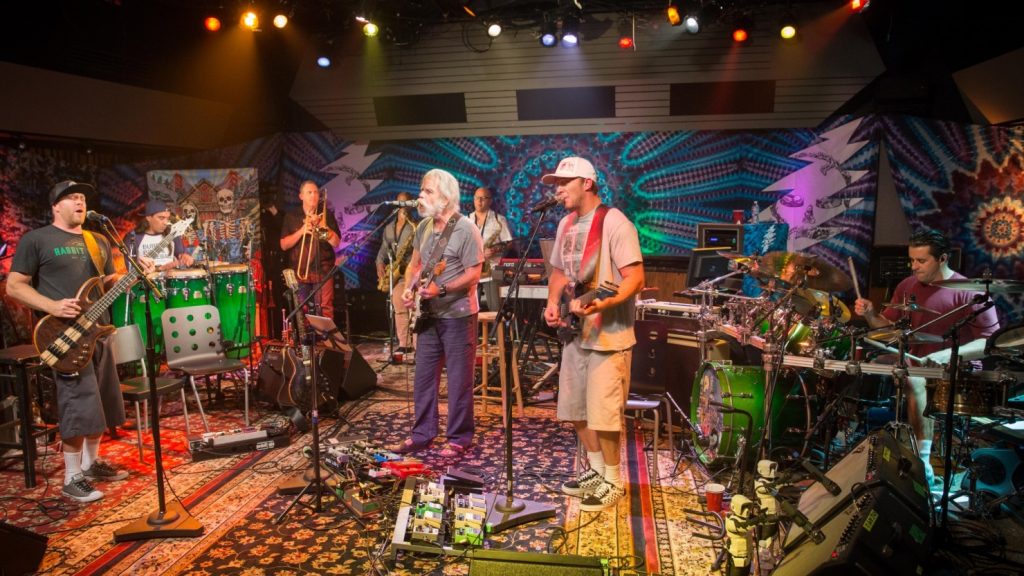 Check out this incredible version of Franklin’s Tower performed by Slightly Stoopid w/ Bob Weir and Karl Denson! Recorded live at Bob Weir’s cutting edge Tri Studio’s, the quality of this video is top-notch. Featuring standard Bobby antics and a funky twist on a Grateful Dead classic, this video is a must-see!

Slightly Stoopid was invited to Tri Studio’s for the first time on September 13th, 2011, for a live webcast and studio recording session. This visit led to the production of a 2 set acoustic and electric performance titled, “Live At Roberto’s TRI Studios”. This is a great performance with amazing audio and video quality. My favorite songs on this recording are “Closer to the Sun”, “Fat Spliffs”, and “I Know you Rider”. I highly recommend checking out this release for yourself.

Similar to their first recording session this performance features mostly original songs but includes “Franklins Tower”, and a few Prince songs as a tribute (Prince’s death was announced the morning of this recording session). Many of the recordings from this session have been released on YouTube and Sound Cloud, but there hasn’t been an announcement of an official release yet.

Tri Studios is the brainchild of Bob Weir and is coined, “The Ultimate Playpen for Musicians”. Located in San Rafael, California, Tri Studios features an array of possibilities and includes two studios, a mixing room, an editing room, and state of the art video streaming equipment.

The purpose of Tri Studios is to act as a “virtual venue” and Weir’s intent is to build upon the Grateful Dead’s penchant for experimenting musically and technically in the quest to “make IT better.”

This means providing the audience with the most intimate connection with the band and providing bands with state of the art recording equipment in a comfortable studio environment.

At the beginning of the “Franklin’s Tower” video, Angelo Moore asks Bobby about the built-in Meyer Sound Constellation System. This is one of the unique and differentiating features of Tri Studios and while I would love to explain this sound system in detail, it truly deserves a post of its own.

In short, this system is able to model a wide array of dynamic acoustics. The Constellation System is able to provide amazing sound clarity for both the listeners and musicians while keeping volumes at a comfortable level. If you’re interested this video provides a short ~5-minute explanation.

Thankfully for the music lovers, Tri Studio’s has consistently released high-quality material since its inception. I look forward to the full release of this show and future collaborations coming out of Tri Studios.

Let me know what you think in the comments section and check back for new releases!

About The Zen Well

The Zen Well is a participant in the Amazon Services LLC Associates Program, an affiliate advertising program designed to provide a means for sites to earn advertising fees by advertising and linking to Amazon.com